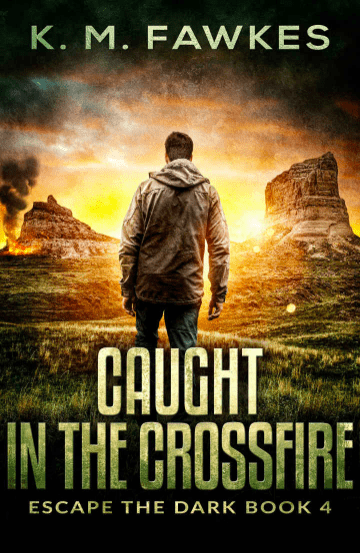 Captured by a force of ambiguous intent, Adam and Ella’s journey into the dark remains of civilisation continues…

Are the so-called military men who captured them as committed to rebuilding the world as they claim? Or are they willing to blow it up all over again to secure their own futures?

It soon becomes clear that Adam isn’t so much a captive, as a messenger. The message? To warn the remnants of the federal government that it’s a new world, and it’s every man for himself.

Can Adam extricate himself from the situation before getting caught in the crossfire?

Caught In The Crossfire is the fourth book in K. M. Fawkes’ Escape The Dark series; a series set within the same fictional post-apocalyptic universe as Enter Darkness, and At Any Cost.