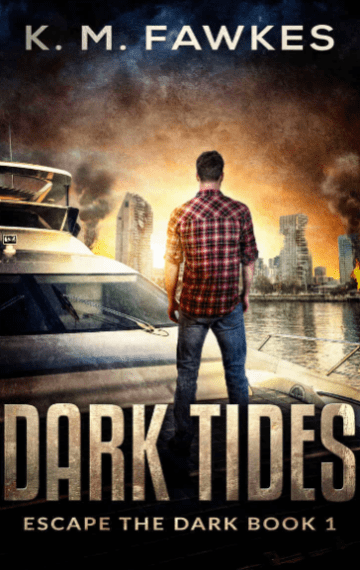 Civilization is collapsing, but the one friend he has left just wants to party till the end of the world…

Adam Parkhead is a one-time child star, now directionless shut-in. Only now he has another reason to withdraw from society: a blood-borne nano-virus is killing millions, and he has no desire to become its next victim.

When an offer arrives that might potentially save his life, Adam agrees to join his old friend Cody on the tech tycoon’s mega-yacht – the two of them can ride out the storm in luxury.

It’s only when Adam gets there that he realizes his friend doesn’t have a plan for survival—he just wants to party, and his boat is stashed with enough supplies that the hangover doesn’t have to happen anytime soon.

As news reports from the mainland get gradually worse, and the chances of humanity’s survival grow dimmer by the day, Cody’s fragile mental state deteriorates further. Little do they know that with the coming EMP, nothing will ever be the same…

Dark Tides is the first book in K. M. Fawkes’ Escape The Dark series; a series set within the same fictional post-apocalyptic universe as Enter Darkness, and At Any Cost.