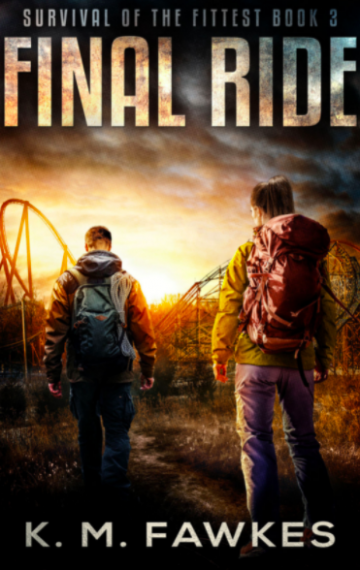 Michelle Lopez has survived a global nerve gas terrorism attack and two kidnappings, as well as risky getaways from captivity and bloodthirsty madmen. It’s the end of the world, don’t you know?

You think you’ve found the help you’ve been searching for, but it’s all a lie.

Stopped short on their road trip by a barricade of tanks, Michelle and Will breathe a sigh of relief at having found what they’ve been looking for—only to quickly realize the armed men who have stopped them are definitely not US military, nor any form of responsible authority. They’re bundled into a truck and driven deep into the wilderness, expecting the worst. What they definitely don’t expect is to arrive at… a theme park?

The below-ground proves just as terrifying as the above-ground…

A depressing scene greets Michelle when she discovers she’s stumbled upon the bigger and badder version of her uncle’s bunker: an underground expanse with innumerable captives, worked to the bone. She knows immediately she has to rescue them, and bust them all out of there—but how?

When standing up for others means all-out war.